Sri Lanka Elle
Sri Lanka elle it was pastime game and Sri Lanka national sport in year between 1970 -1990.which was introduced by our ancestors in Sri Lanka more Than thousand years ago.But now it was operated few district such as Colombo,Gampaha and Putthalam.All elle players' and supporters in these District dedicated their time for elle.
At the beginning of the 20th century, Elle, was the most popular sports discipline in the coastal belt of Western and North Western Provinces.Many Elle clubs sprang up in these areas. It became a very competitive game and there were many Elle matches played during the weekends. It was popularly known as the "Poor Man's Game".Lorry loads of keen players and spectators flock to see their Teams in action. It was always a healthy and friendly competition. Sometimes very rarely they erupt.Today, 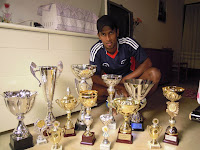 Elle, is played between two teams, each 16 players, on a field with a base (Katti). There are three "Kattis". The rubber ball (Tennis Ball) is struck with mostly "Bamboo" stick, and players score a run by circuiting the bases (Katti).In rural areas the game of Elle is played in open fields. After the harvest is collected Elle Match played in a paddy field is a common sight.

Sri Lanka Elle
S Jude Silva ,No 56/B ,Thibbotugoda, Ganemulla, Sri Lanka
We are planning to published all details of Sri Lanka elle Photos videos and every details. you can see... when you visit and checked through this page.

You Can Translate All Details